Vice President of Enterprise Networking & Cloud Marketing Prashanth Shenoy gives us all the details on the future of Network-as-a-Service. 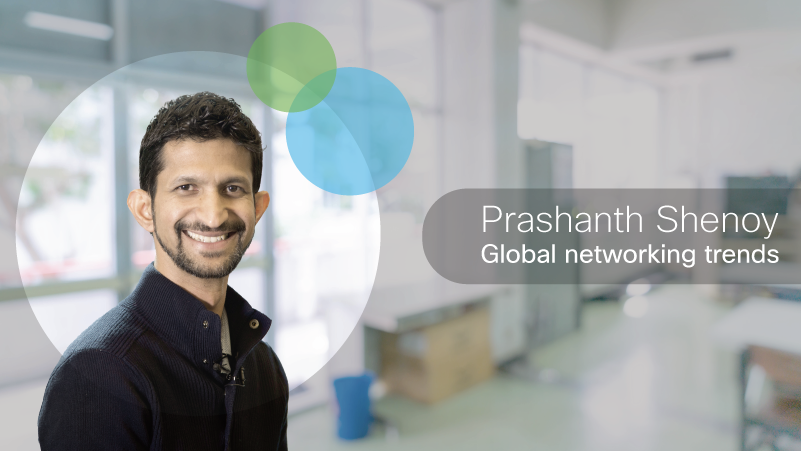 Facebook
Consuming networking infrastructure as-a-Service is the undeniable next move for many organizations—IT teams are finding it increasingly difficult to manage growing complexity while also feeling the pressure to continually deploy the latest advanced networking tech. Networking-as-a-Service (Naas) (or a cloud-enabled, usage-based consumption model that allows users to acquire and orchestrate network capabilities without owning, building, or maintaining their own infrastructure) can be a suitable solution to help them keep up with the fast pace of the business.
Cisco first introduced its move towards an as-a-Service during Cisco Live 2021, announcing their plans to deliver simpler IT and flexible consumption for customers through Cisco+. The company began this transformation by delivering on Cisco+ Hybrid Cloud, and is now on its way to providing a NaaS solution. In an effort to share insights into businesses’ NaaS needs, Cisco published the latest Global Networking Trends Report based on a survey of 1,534 IT professionals across 13 countries that asked them about their hopes, dreams, and fears as they consider adopting a NaaS model.
For many organizations, the hope for NaaS is allowing IT to move away from simply “keeping the lights on.” 46 percent of respondents believe that the top benefit of NaaS will be freeing up IT resources to deliver innovation and business value. We spoke with Cisco’s Vice President of Cloud and Networking Marketing Prashanth Shenoy to tell us more about what the findings mean for the future of NaaS adoption.

Q. What does this research tell us about why organizations are considering NaaS models as they deploy new networking infrastructure?

A. There’s one word to describe why— freedom. It’s freedom to move fast, freedom to be able to deploy new technology, as well as the freedom of having time on their hands to focus on business innovations. This way, they won’t be bogged down by the minutia of setting things up, deploying, managing, monitoring, and testing. I think that’s what a lot of our customers are looking forward to—how NaaS can help them move fast and provide the freedom of choice with flexibility and innovation.

Q. As-a-service isn’t a new concept. How are the motivations different regarding NaaS compared to other models like SaaS or IaaS? What is unique about NaaS?

A. SaaS and IaaS have been in the industry for a long time, and customers were mostly looking at these from a cost efficiency standpoint. With NaaS, what we have seen through the report is that our customers are less driven by cost and more driven by the need to move quicker, so that they can truly focus on networking as a critical foundation. When they’re not concerned with the day-to-day operations, they can focus on driving business innovation using networking as a foundation. That’s one of the predominant drivers and key motivators for NaaS, and with that comes some positive side effects, like not needing to worry about security concerns.

Q. What are potential customers most apprehensive about as they look to adopt a NaaS model?

A. With any technology transformation, whether it's around consumption models or new services, there's always hesitancy and concerns around giving up control. In the report, the customers we talked to had concerns about whether NaaS could support some of the unseen future demands. We’ve all gone through this experience of hybrid work that nobody was prepared for—they want to make sure can it meet all of these unforeseen demands in a very fast, agile manner. Can I still have control? Can I still have visibility to how things are working? Can I get security controls? If done right, NaaS can actually provide IT teams more control to align to business priorities and apply security policies in a more effective and efficient way.
This is also a transition of an operating model for IT, so there's always a transition cost involved. How do I move from a brownfield environment, which is completely CapEx and managed by a customer, to something that I want to deliver as a service? The cost of transition and the disruption that may occur because of this transition are some of the concerns our customers are facing.

Q. When will NaaS be more mainstream? Will it completely take over from traditional networking models?

A. It's going to be a journey for a lot of businesses, and as we talk to these customers we have learned that most of these organizations see the move to NaaS as part of their normal infrastructure upgrade cycle. In fact, 49 percent of IT leaders and a majority of the practitioners who are managing the day-to-day network operations felt that the best timing and circumstance for NaaS adoption is during an infrastructure refresh or upgrade cycle.
Every customer is on a different journey—I think COVID has accelerated a lot of these technological business model transitions. If anything, it’s made it even more critical and urgent. But is there a timeline that says NaaS will be mainstream by a certain date? No, but you'll see a lot of customers who are in this refresh cycle.

Q. What surprised you the most based on the findings of this year’s report?

A. One of the more surprising facts was that more than one-fourth of the respondents thought that they already had NaaS deployed. With these technology transitions, there can be some whitewashing that happens. We, as vendors, have an obligation and responsibility to create more awareness and education, and to be very open and transparent around NaaS technologies. We need to provide the guidelines, benchmarks, and industry standards on what constitutes NaaS. NaaS needs to have some basic cloud managed service level agreement, flexibility of consumption models, billing, outcome-based, all of these packaged together.
Another surprising finding from the report was around early NaaS use cases. We found that people are looking at multi-cloud access and cloud delivered security as one of the key areas where they want to try NaaS. Because of this, SASE (Secure Access Service Edge) seems to be one of the likelier technologies to be deployed as a NaaS.
To learn more about NaaS, check out Cisco’s latest Global Networking Trends Report.
###