How technology empowers women in STEM

Camilla Ngala Timfe’s daughter penned an essay about how her mom is her hero. This was influenced and inspired by Timfe’s incredible, real-life journey immigrating from Cameroon to the United States, and transforming her career from laboratory technician to cybersecurity professional. Timfe says massive amounts of hard work, her can-do attitude, and sheer will has provided her daughter an example of resilience and showed her that education can be a pathway towards success. She is just one of many women around the world changing their lives by pursuing a career in STEM.

The International Day of Women and Girls in Science is observed by the United Nations as a way to celebrate and grow the movement of women in science, technology, engineering, and mathematics. Currently, less than 30 percent of researchers globally are women, and women of color earn the smallest share of STEM degrees—just 14.1 percent of bachelor’s degrees across all STEM fields. While the number of women in science and engineering is steadily increasing, issues of unconscious bias and stereotyping around gender differences remains a systemic issue.

And given  the high demand for STEM jobs now and in the future (growth in STEM careers is 3 times greater than non-STEM jobs), the world needs more women in STEM like Timfe.

Follow Cisco Networking Academy student Camilla Timfe and instructor Stephanie Harvey into their technology journeys and see how they were able to take the power of education and technology and use it to empower themselves and positively influence others around them.

Timfe was working as a clinical laboratory technician at the United Nations Mission in South Sudan (UNMISS) while taking care of her children and waiting for her family visa to be approved. Her husband had immigrated to the U.S. in 2016, and, after waiting for two years, Timfe  and the two children joined him in 2018. 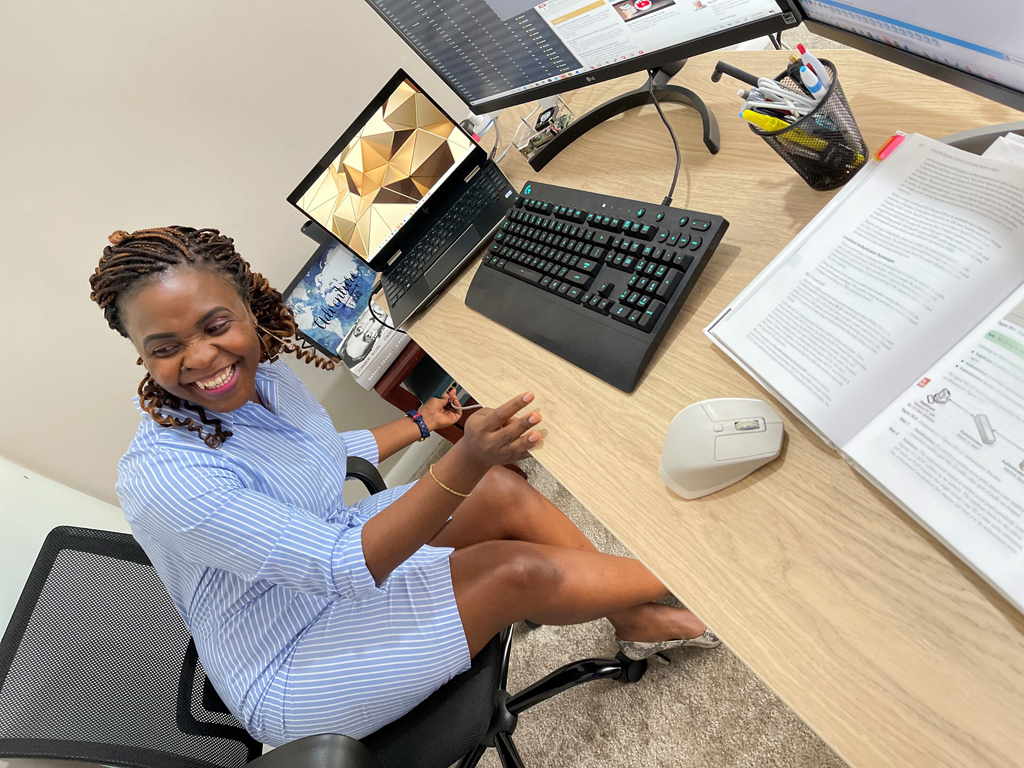 It was there in Baltimore County, Maryland, that she began taking  classes at the Community College of Baltimore County (CCBC). (Networking Academy is a global education program with curriculum taught online or at local educational institutions that cover the latest in networking, programmable infrastructure, cybersecurity, and the Internet of Things . For students, it is a pathway towards earning  Ciscocertificationsand starting a career in IT.

“Cisco Networking Academy classes at CCBC were very interesting and exciting,” says Timfe, “The labs that included physical, hands-on practice reinforced my understanding and gave me a real feel for the working world. They were also very instrumental both in making me attractive to potential employers and giving me skills I can immediately use on the job. My instructor Ms. Vinitha Nithianandam was particularly wonderful, with her extensive knowledge of networking and strong encouragement.”

As a student, mom, and new immigrant to the U.S., Timfe had to juggle various responsibilities that came with her many roles. She says that through organization and determination, she was able to find the right balance and still achieve her goal of landing a cybersecurity job.

“I had to be organized and very determined. I planned and scheduled every activity, including itineraries for family time, creating daily lists, and trying as much as possible to stick to the schedule,” says Timfe, “And thanks to the Networking Academy courses I took at CCBC, I was able to impress employers during interviews and on the jobs itself.”

Now, Timfe works as a security operation center (SOC) analyst, where she monitors the network and traffic for abnormal activity and any forms of compromise. Her initial interest in cybersecurity included a desire to protect online transactions from unauthorized users or cybercriminals, and now she is able to safeguard the network in a proactive way.

Her determination to achieve a cybersecurity career not only touches those closest to her, but also provides a stunning example of adaptability to anyone pursuing STEM.

Stephanie Harvey aims to reach students in the most remote areas of her home state. As a Cisco Networking Academy instructor based in Alaska, Harvey started teaching Networking, CyberOps, Internet of Things, and Python courses in 2017 at the University of Alaska Fairbanks. Harvey says that she can relate to students participating in distance learning because she, herself, teaches at a distance. 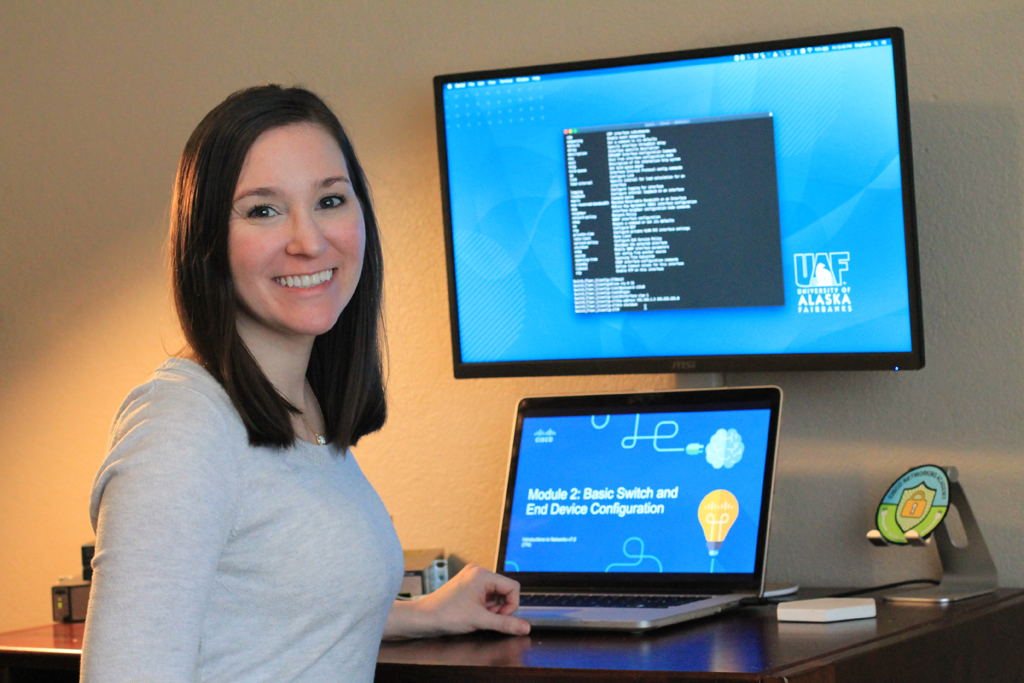 “I'm a distance instructor out of Juneau.I don't live in Fairbanks, so I can definitely empathize with remote students,” she says. “Normall, I would have synchronous classes with students, but COVID made that a bit difficult for some students because they needed to juggle kids and work. There are also just difficulties with the Internet.”

Common Sense Media reports that 31 percent of students across Alaska do not have an adequate internet connection, while 19 percent don’t have access to devices. The pandemic, in particular, highlighted a massive digital divide for residents in rural Alaska, who need the resources and infrastructure to stay connected to crucial news, healthcare, and information.

The remote nature of some rural Alaskan areas can be difficult to imagine.

“Alaska is really unique. You can only get to where I live in Juneau by boat or by plane,” says Harvey. “There are a lot of cities and villages within Alaska that are the exact same way. Many of my students don’t have big grocery stores, a lot of their stuff has to be flown in.”

The Networking Academy instructor shares a story about one of her students from the Aleutian Islands, a chain of islands in Alaska with a population of about 8,000 residents. To attend Harvey’s classes, the student would go after-hours into a school where he worked in order to get the internet access needed to attend meetings and watch video courses.

Clearly, the digital divide not only reveals the disparity between those who can access the internet and who cannot, but also the ability to develop digital literacy and even become trained in IT education. When the University of Fairbanks, local libraries, and other locations needed to shutdown due to the pandemic, some students in Harvey’s class found it difficult to attend video meetings.

“Instead of having scheduled meetings I decided to film videos and post those instead,” says Harvey. “That way, they could watch whenever it was convenient for them. Pre-COVID, students could go into a classroom and work with the actual hardware that they could connect cables into. What Networking Academy does now for remote students is allow them to have that experience, but remotely.”

Cisco’s Packet Tracer tool is just one way that students can gain hands-on experience while at home. The network simulation program helps IT students practice building networks across a variety of different devices, create solutions for smart cities, homes, enterprises, and more.

Ultimately, Harvey believes there needs to be a united effort across government and corporations to bring funding for internet infrastructure across Alaska. This can help provide Alaskan citizens with the connectivity they need now as well as the tools for education that can drive future careers and education.

“We have to think about the Internet like we do electricity,” says Harvey, “We need to find a way to provide Internet to everyone, so  they have the same opportunities that everyone else in America has.”

Students and instructors  like Timfe and Harvey show us that STEM can be a stepping stone to a myriad of careers and life-changing possibilities. While more people around the world are looking into pursuing IT jobs and education, we must be aware of the barriers around gender bias and the digital divide that can separate us from achieving inclusivity and opportunity.

“STEM is an interesting field with amazing careers opportunities for everyone - both women and men,” says Timfe. “I believe women need to approach STEM with a resolute mindset of 'I can do it and I am determined,’ paying less attention to the stereotypes and focusing on successful outcomes.”

Inside Cisco
When disaster strikes, digital technologies save lives
Through volcanoes, floods, or droughts, Cisco and Mercy Corps lessen the suffering and expand the connectivity.
Inside Cisco
Expressing an authentic self, beyond the barriers of difference
For Black History Month, three multi-diverse Cisco employees share their journeys.