When COVID-19 became a global pandemic, Brice Achkir, a Cisco Distinguished Engineer, was like many people. He felt helpless as news reports showed conditions becoming more and more heartbreaking and dire. He made a donation, but he wanted to do more. “I saw doctors wearing basically plastic bags,” Achkir said.  “I thought, ‘come on, we’re in Silicon Valley, we’re in California.’ That was a big motivator for me, and also for the team.” 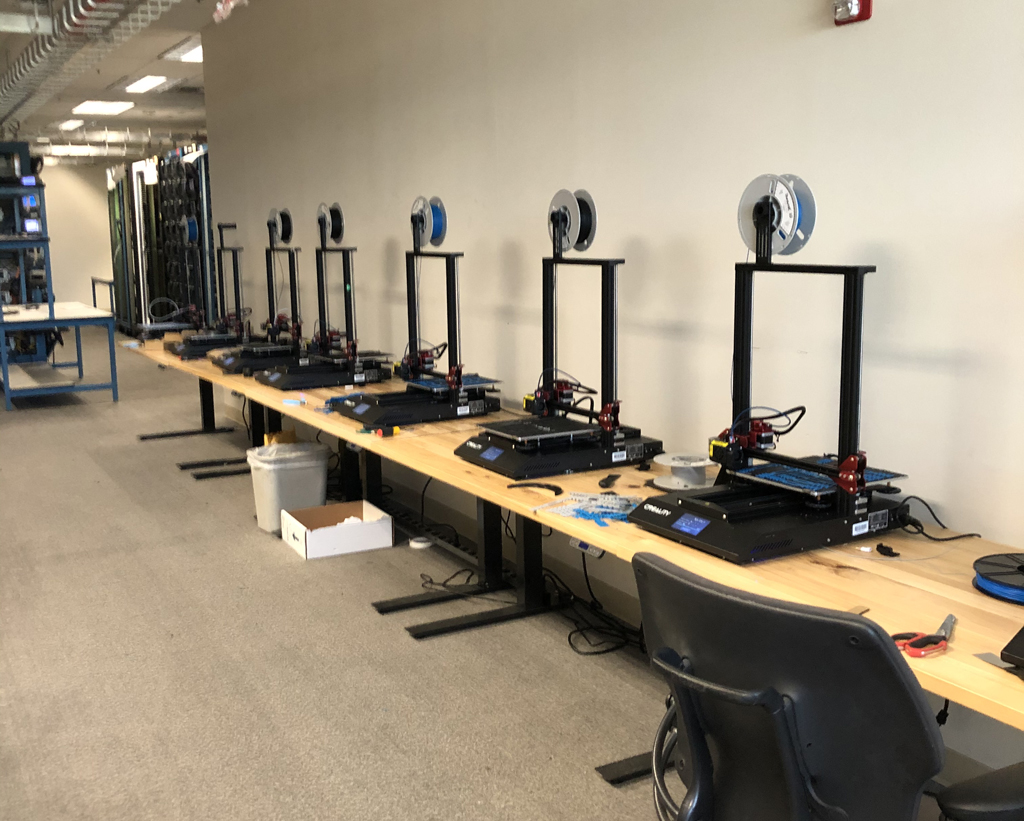 With Cisco employees working from home, innovation labs equipped with 3D printers weren’t in use. Cisco is not in the business of making medical supplies, but with a severe shortage of personal protection equipment, Achkir wanted to fire up the 3D printers to make face shields. Achkir credits Cisco’s Chief Operating Officer Irving Tan for championing the idea and making it a reality. “As soon as Brice bought this idea to me, I knew it was something we should do, and could execute on quickly,” Irving Tan said. “I volunteered as well for a couple of days, as did some of my peers on the Leadership Team, which quickly grew into a friendly competition to see who could produce the most! But competition aside, we are very proud of all the people involved in this project here in the Valley and around the world, as it is truly having an impact and helping those who need it.”

As Tan mentioned, Cisco employees across the globe got to work to provide PPE gear. “It doesn’t matter whether you’re in the UK, the US, Australia, or the Philippines, the need was the same,” explained Ginita Taylor, Tan’s Chief of Staff.  “We were really lucky that everybody started to talk to each other and is a great example of us working across Cisco.”

Back in San Jose, before Cisco volunteers could ship anything, they first needed to come up with a design and scoured the internet looking for something that would work. “The first few days we probably built out ten different designs that are out there, and then we talked to physicians,” said Paul Lee, a Cisco supplier quality engineering manager, who has been working alongside Achkir to make the shields.

Doctors from the County of Santa Clara Health System gave important feedback and the engineers went back to improve on the original designs to make sure the shields were as comfortable as possible. “The doctors and nurses would be wearing these shields for 8, 10, 12 hours a day, and we shared the level of customization that we were looking for, and we were excited they came back with another prototype,” said Jennifer Yoon, the Assistant Director of Pharmacy at the County of Santa Clara Health Care System.

Once they approved of the design, the Cisco volunteers got busy creating the shields, and turned nearly an entire floor of a Cisco building into a production line. Taylor turned into the defacto project manager for the production in San Jose, California, overseeing volunteers, supplies, interaction with hospitals, and even bringing in food for the volunteers. For Taylor, it has been gratifying to see the number of volunteers showing up to help in any way they can. “When something like this happens, we come together very, very quickly. Nobody says I don’t want to do that,” Taylor said. “And of course, when it comes to something like this, we just see it on an exponential scale.”

And the production did indeed grow exponentially. In the beginning volunteers assembled less than one hundred shields a day, but quickly went from increasing production to 500, 700, and at its height up to 1300 in one day.  Ultimately, a total of 20,000 masks were made out of the San Jose site and donated to hospitals and medical facilities in Santa Clara County. 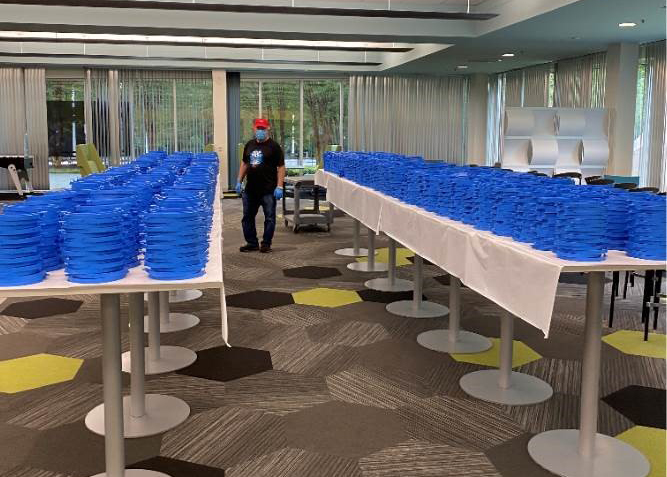 At the North Carolina site, instead of using 3D printers, volunteers are working with an injection molding tool, allowing them to ship between 3500 to 4000 face shields a week to food banks and rural health care workers. So far, 4000 have been shipped, and they anticipate delivering 20,000 shields. 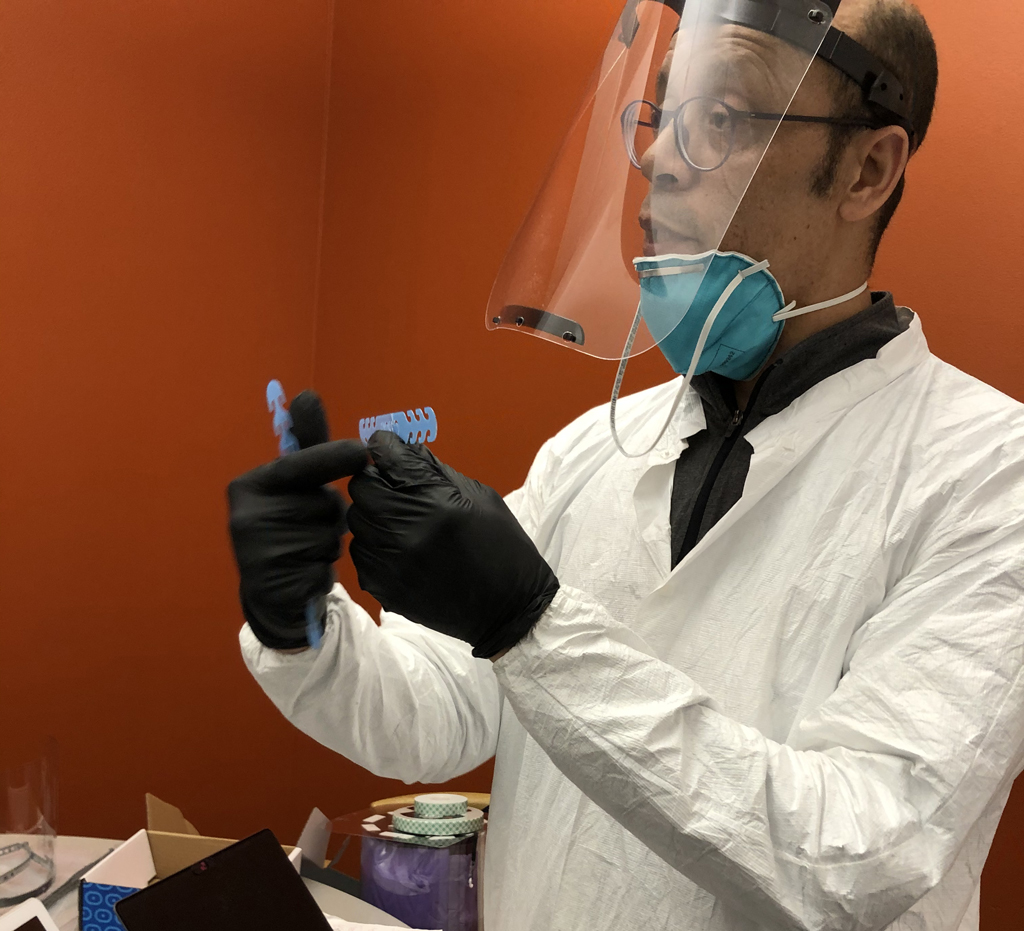 Cisco engineers in San Jose also used the 3D printers to make thousands of comfort bands for medical workers. The bands hook to the elastic of face masks, helping to relieve the pressure and prevent irritating the back of their ears. Achkir said he and his team were able to get the bands into the hands of doctors within two hours of the request. This is a great example of how fast 3D printing technology can create a quick solution.

Volunteers started wrapping up the 3D printing production of face shields and comfort bands at the end of May, but the time they spent finding a solution for a lack of personal protection equipment won’t soon be forgotten.

While Achkir says he hasn’t had a chance to think about the impact he’s having, Lee marvels at how quickly they were able to pivot to help first responders in a time of need. “We’re not here as a face shield company, but we did this, we stepped up and I feel really proud that were able to deliver what we could.”

Inside Cisco
#BreakTheBias
Cisco Chief Customer & Partner Officer Gerri Elliott shares how to #breakthebias at our companies and in our communities.
Inside Cisco
Cisco and UBS to host ESG Conference Call/Webcast
Cisco and UBS will host an ESG (Environmental, Social and Governance) Conference Call/Webcast for the Financial Community at 8:00 a.m. PT/11:00 a.m. ET/4:00 p.m. BST, on March 10, 2022.