Thanks to tech advances and lower prices, small-to-medium sized businesses are installing robotics. 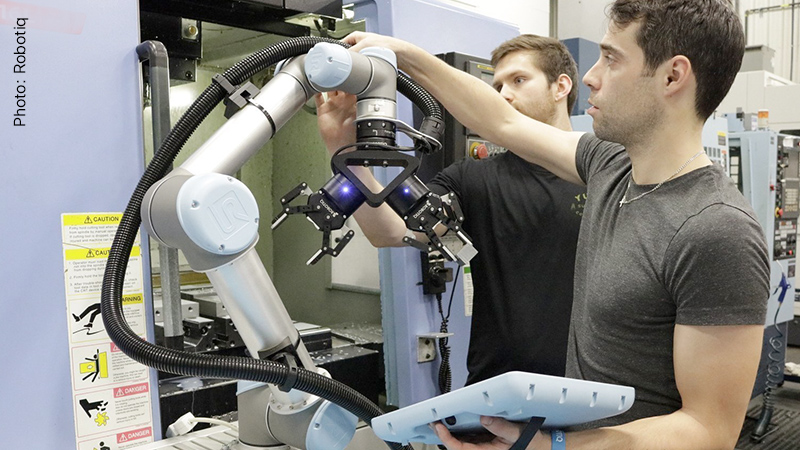 Last year, the robot revolution came to Qualitetch. That’s when the small metal components manufacturer, located near London in a town called March, installed a robotic arm for picking up and loading metal sheets onto a conveyor belt. With a price tag of £5000, it came at a cost that the 38-employee company could afford—and, according to Commercial Manager Ashley Drew, performs its job about 30 percent to 50 percent faster than when completed by a human.

“It used to be done end-to-end by a person on the line and it wasn’t very efficient,” says Drew. In September, the company bought another one.

More small-to-medium-sized businesses (SMB) like Qualitetch are using robots in their factory operations. Certainly, expensive industrial robots, especially in the automotive sector, still comprise most of the overall robotics manufacturing market. But smaller, more agile brethren—equipment that littler manufacturers can afford—are making headway. That’s thanks to advances in software, sensors and vision systems. Plus, there’s an increasing number of affordable plug-and-play devices—items like grippers that are designed to be attached easily to robotic arms from other manufacturers.

The action is especially heated in collaborative robots, known as cobots, lightweight devices which safely interact with people in a shared area or in close proximity. One study, by Markets and Markets, predicts growth in cobot sales from $10 million in 2018 to $12.3 billion in 2025.

Such robots are considerably more affordable than the traditional industrial kind, which generally cost $50,000 to $80,000 per unit. In addition, they offer small companies capabilities that can reduce mistakes, boost efficiency and eliminate deadly dull, monotonous tasks. One robotics supplier estimates that 95 percent of its robotics customers have just five robots or less.

One major appeal for SMBs is how much easier cobots are to set up, program, and start running.  At Qualitetch, for example, it took employees 10 minutes to program their first robot and about two hours to get up and running. Through a process called programming-by-demonstration, employees can teach their cobots to perform certain activities and then repeat them on their own. That’s compared to the weeks or months it takes to install industrial robots, a process also requiring highly skilled engineers to do the programming.

Addressing workforce challenges is another big attraction. In today’s tight labor market, many SMBs can install robots to take over certain tasks, rather than searching for new hires.

“It allows them to grow the business with their existing workforce,” says Matt Minner, senior consultant technical services at Catalyst Connection, which provides consulting and training services to small manufacturers in southwestern Pennsylvania.

Generally, SMBs use robots to do specific tasks, rather than multiple activities.

“The challenge is finding a good fit—what aspect of the process can they automate to create a return,” says Minner.

“They’re meant to do simple and boring things,” says Suryansh Chandra, co-founder of robotic arm manufacturer Automata. It just shipped its first products in 2019, aimed at companies with less than 100 employees that couldn’t afford robotics before.

Lowercase is one example of an SMB using robots. Founded five years ago, the Brooklyn-based company designs and manufactures acetate eyewear, sold mostly to wholesalers, using a highly labor-intensive, multi-step manufacturing process. Co-founders Brian Vallario and Gerard Masci installed a robotic arm from Universal Robots, attached to a gripper from Robotiq, to take care of one part of production: The robot interfaces with a CNC machine that turns plastic sheets into frames and then places them into a bucket.

Like other short-staffed SMBs, Lowercase has found that introducing robots has freed up personnel to focus on more complex tasks they wouldn’t otherwise have the time for. With just five employees, according to Vallario, he would have had to take care of the time-consuming process the robot performs.

“I would need to stand at the machine and load it all day,” says Vallario, who programmed the robot himself. Now, he says it allows him to focus on design and other production tasks.

Robots, in fact, were essential to his company’s launch. With little to no previous manufacturing experience, Vallario, an architect, and Masci, a finance expert, spent two years researching the process.

“Using robotics was a big driving force,” Vallario. “I would say we made the decision to use robots even before we had a lease on a manufacturing space.”