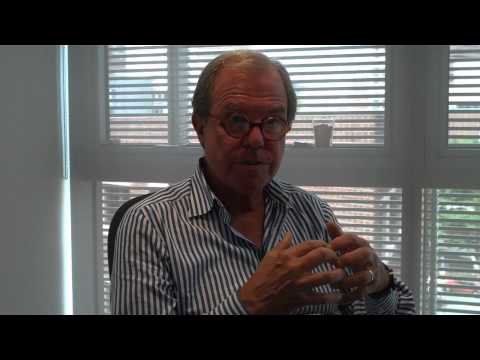 Nicolas Negroponte shares his views on new education models. Do they work, and do they have a future?

Nicholas Negroponte talks about the evolution of technology in education, and an amazing reading experiment in Africa.

Nicholas Negroponte has long connected technology and education in pioneering ways. He joined the faculty of the Massachusetts Institute of Technology in 1966, and in 1985 created MIT's groundbreaking Media Lab. Two decades later, Negroponte left the Media Lab to run a program called One Laptop per Child, with a goal of building a $100 low-power laptop that could help educate children in the developing world. Negroponte still keeps a small, barely-furnished office at the Media Lab. He was interviewed there by Kevin Maney.

Kevin Maney: One Laptop per Child did a lot to change the conversation about education and technology. What was the genesis of OLPC?

Nicholas Negroponte:  It goes back about 40 years to the early work of Seymour Papert, a young professor at MIT. He made a simple observation, that computer programming is the closest approximation to thinking about thinking. If kids could learn to write programs, they would be engaged in an activity that approximated what they were doing themselves.

Particularly in the context of debugging, because whenever you write a program and it doesn’t work, you see what it did, you change it, you try it again, and you converge on a working program. And what kids were doing, not necessarily knowingly, but they were teaching a computer. In a sense they were learning how a computer learns, and it was very similar to how they should learn. We found in the 1970s that kids who wrote computer programs were better spellers.

Negroponte: If you get a spelling test and you get eight out of 10 words right, the last thing you care about are the two words you got wrong because you got a B. Whereas the kids who were practiced at programming where debugging was the fun part and the bugs were the interesting things -- they all started trading words with each other that they got wrong. So suddenly these kids found joy, if you will, in the spelling mistakes, and became better spellers.

In 1980, Sheik Yamani of OPEC funded a center to help children in developing countries and Seymour Papert and I worked in Pakistan, Senegal, and Colombia. While the Media Lab was being built as an entity, physical as well as organizationally, we worked with kids in those countries. They were totally comfortable working in computers and computer programming – in this case, it was Apple IIs. They didn’t need the manuals, they didn’t need anything. So fast forward 20 years. The Media Lab had always had about 25% of its activity with children and learning. And after I directed the Media Lab for 20 years, somebody else came in as director and I said, “It’s my turn to do something.” And that’s when One Laptop per Child, or what was first called the Hundred Dollar Laptop, was born.

But what had happened over the intervening 20 years, it’s quite extraordinary: computer programming fell off the table. Kids, from very good schools, weren’t engaged in it.

Negroponte: Companies like Microsoft and others wrote apps for the kids to use. So you became a user, not a programmer. Everybody was writing apps for kids and kids were consumers. That drift coincided with people being more and more convinced that the way to understand if a child is getting an education is to test what they know. And the truth is, testing what they know doesn’t tell you very much except that they know what you just tested them on. With One Laptop per Child, we concurrently tried to change the conversation about education to be more about the kids making things, particularly computer programs, versus absorbing a body of information that’s being plugged into their heads.

Negroponte: It wasn’t the only thing. It had to be a little more surreptitious. There had to be stuff on there - books and so on. But programming was very much key. The one country that did every child first, Uruguay, passed a law that all kids have to learn to program. That’s wonderful. It’s not because they’re going to get jobs as programmers but because programming is thinking about thinking.

Maney: At the same time, you were really pushing the limits on what you could do to create inexpensive laptops.

Negroponte: We broke a little spell. There had been this escalation that every time that Intel made a faster processor, Microsoft used more of it. And so you got faster processors and bigger operating systems. And things got more and more complex but stayed roughly at approximately $1000 per laptop.

But if you could simplify it and bring one side of that equation down, you could see price go down. You could build, in theory, a $100 laptop.

Somebody had to break the spell. There was no commercial interest in doing that...  Imagine building a product that costs 50% less in 18 months. That’s really a terrible business. So you had to put in features, do things to jack it back up again. That’s what the industry had been doing.

In the end, we hit the $100 goal, at least in 2005 dollars. It just got people thinking a little bit differently, so it changed the industry, though that wasn’t the primary agenda.

Maney: If you’ve been able to change the conversation in places like Uruguay, about programming being important to education, I don’t have a sense that that’s happened in the U.S. at all.

Negroponte: The U.S. is a much harder problem. The system itself is part of the problem. Last I looked there were 15,000 school districts. How do you deal with 15,000 districts?  You can’t really make the kinds of changes we found ourselves able to do in Ethiopia, Rwanda, Uruguay or Peru. So it’s a harder problem, the way it’s organized the way it’s financed.

Maney: What about connectivity and power in some of those regions?

Negroponte: It’s getting better and better thanks to the reach of the cell phone system. Depending on the country you can often put a Wi-Fi antenna on one of those towers. So connectivity is getting better and better. Some countries like, Uruguay again, every kid had a connection at school and almost all had a connection at home. The phone companies are owned by the government so the government could legislate that the kids could be connected. Ethiopia, where connectivity is very poor, if you had the resources you could put a satellite link and you could then distribute in the village. Power was always a problem and not just because there aren’t outlets. You wanted a long battery life but in the sense of not just the number of hours. You wanted power to be low enough, consumption per minute, per hour, so that you could get down to something below 10 watts, more like 5 watts. When you get down to those levels you can start (hand) cranking, or you can have solar panels that are this big.

Maney: Fast-forward to now, and there are so many devices moving into the developing world, especially cell phones. Are they impacting education in some of the ways you were hoping your program did?

Negroponte: Cell phone reach is helping a great deal. The actual cell phone itself is less important than the connectivity. I think you’ll see a lot more happen in the next five years because of tablets. But the cell phones themselves, when people have done efforts in education, it’s very drill and practice. You know, spell this word, or here are two numbers, multiply them. It’s not constructionist in any way.

Maney: What are you doing now?

Negroponte: I spun out One Laptop per Child. It’s based in Miami. It has its own executives, its own board. I’m not even on the board. And about two years ago I started a project. It’s not a billion-dollar project, it’s a small experiment.

And the experiment was to see if children could learn how to read on their own, without school, and without literate adults. The reason that was important –if you can learn to read you can read to learn. But the deeper scientific reason is that the brain evolved over, let’s say, a million years so that actually the brain knows how to talk and how to walk and you can take a five-year-old kid from any part of the world and drop that kid in Paris and that kid will speak French in, you know, eight months or so.

Reading’s not like that. Reading’s only 3,500, 4,000 years old. The brain doesn’t do it naturally. It’s different than talking, but the question was how different. So we picked two villages in Ethiopia that had no literate adults, no printed words, no labels on bottles, no street signs, no electricity, no nothing. And we dropped off as many tablets as there were kids in the village, more or less at the edge of the road. No humans, no instructions.

The only thing we did do the night before is we dropped off a solar panel and taught one adult to put it outdoors and just to charge a car battery. That was it. The tablets were hot in the sense that if you touched them it recorded and so on. Within two and a half minutes, again no instructions, no adults, the first kid turned on the first tablet. This is in the first village. Within five days they were using 50, five-zero, apps per child per day. Within two weeks they were singing ABC songs and within six months they hacked android. Literally. No adults, no literates, nothing.

A faculty member at Tufts working with us, named Maryanne Wolf, went to Africa recently, went to the village, and the kids are doing what they call in their lingo the precursors of reading. They had actually done enough so we’ve decided to make it an X Prize. So there’s now a Global Literacy X Prize. The question is, can you drop a technology into places that have no schools, no electricity, no this and that – turns out there are a hundred million kids in that category so this is nontrivial – and after two years the kids are literate.

That X Prize was announced, but it’s not officially launched yet. It’s a $15 million prize. So amongst other things, what I’m doing now is chairing the XPRIZE and see if we can push this faster.

“With AI,” Cisco’s Joseph Bradley said, “we’re at a crossroads

Last year, the robot revolution came to Qualitetch. That’s when