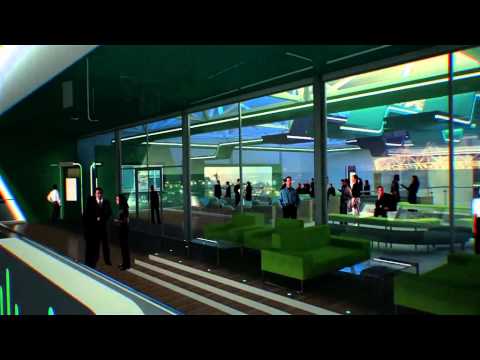 The latest fly-through video of the Cisco House.

The iconic black cabs of London are moving up a gear in terms of the communications facilities they offer to visitors to the British capital.

As millions pour into London to witness the greatest games on earth this month many may also be impressed by the ride into town. The hackney carriage, one of the icons of the British capital, is changing with the times—and communications technology is high on the list of innovations.

Driven by the increasing use of taxis as an advertising medium, many black cab drivers now offer connectivity options for business travelers and tourists.

In recent months, for example, a media company called Ubiquitous Taxis has worked with one technology company to install temporary in-cab Wi-Fi networks based on dongles that are plugged into the vehicle's cigarette lighter.

"You have got this idea that London is going to be its own little Wi-Fi zone in the next 18 months to two years," says Sarah Christmas, head of marketing at Ubiquitous. "That is great, but that is a way off.

"It is very patchy across London at the moment and the majority of people will be using their own data package that comes with their phone. More often than not that is how people are accessing the Internet."

"In development are a number of different systems that offer a more permanent Wi-Fi solution. We are looking at them as a potential area to move into," Christmas adds.

Getting free Internet access is only one part of the connected cab experience, though. As any mobile device user knows, there is nothing more frustrating than getting a signal… then running out of power.

In a survey of 500 passengers, more than four out of five said they would use Wi-Fi in a taxi if it was available, and they would be 80 percent more likely to go online. A similar percentage would be more likely to choose a cab equipped with Wi-Fi over one without it.

"For the kind of London taxi audience who like to stay connected and are probably quite upwardly mobile, well connected people, tech-savvy, this is a service that they really want," Christmas notes. "It is seen as an amazing value service to provide for free."

Andrew Barnett, the managing director of Ubiquitous Taxis, adds that in his conversations with London cabbies he has heard numerous stories about how passengers appreciate being able to charge their phones.

In addition, he says: "If hypothetically you are at Liverpool Street station and there is a cab rank, there are people that will not go to the first cab; they might go to the fourth cab because they know it is Vodafone and they know it has got a phone charger in."

An additional benefit of having in-cab charging and connectivity is that the drivers themselves can use them to stay connected.

In London you can get a mobile app enabling you to hire a black cab from your smart phone, but that depends on whether the driver has a connected smart phone too. If they have free Wi-Fi in the cab then they get the benefit at no cost.

Barnett believes a significant number of London cabs could become equipped with Wi-Fi over the coming months. "We are looking at a number of options currently," he states. "There is not a week that goes by when some potential advertiser is not enquiring about Wi-Fi."

Christmas adds: "We have got, in Transport for London, quite a progressive organization that is keen to keep Londoners connected and I think will welcome with open arms a solution that brings Wi-Fi to taxis, whether that is sponsored or free."

It is also likely London cabs could take a leaf out of the book of taxi operators in other countries, for example by making greater use of near field communication technologies as is currently the case in some parts of Asia.

What is clear is that as the pace of technology change accelerates, so will the level of innovation that London's visitors and workers experience in the city's cabs. "The user experience is extremely positive," says Christmas.

"We appreciate that for people who are busy, who are on the move, and often do not have an office and work on a mobile basis, having power and having data are two really vital things in keeping you connected to the outside world."

Jason Deign is a freelance writer located in Barcelona, Spain.

The contents or opinions in this feature are independent and do not necessarily represent the views of Cisco. They are offered in an effort to encourage continuing conversations on a broad range of innovative technology subjects. We welcome your comments and engagement.

Cisco turns the dream of independent living into reality

A new partnership between Cisco Canada and York Support Services

Cyber Monday helps ring in the most festive time of year. But

It has not been an easy year for public-sector cybersecurity

The smart, sustainable port: where sea, rail, and road meet

On a typical day in a major port, cargo ships carrying up to